The First Presidency released a statement in January 2002 stressing the importance of home storage and of securing a financial reserve.

The suggested amounts of basic foods for one person, for one year, were as follows:

60 pounds of sugar or honey

As of now (9/2017) the minimum (note the difference between the words “recommended” and “minimum” and understand that recommendations have NOT changed!) the Church is asking us to have has been reduced to a mere 300 lbs of grains and 60 lbs of dry beans per person. This amounts to roughly 1550 calories per day, barely enough to ward off starvation for most.

At the end of one year, eating just this food, you will likely be alive, but you will look like you just came out of a concentration camp. (see table below)

(1)        Pres. Ezra Taft Benson shared this in Oct. 1980 GC: “Elder Harold B. Lee counseled, ‘Perhaps if we think not in terms of a year’s supply of what we ordinarily would use, and think more in terms of what it would take to keep us alive in case we didn’t have anything else to eat, that last would be very easy to put in storage for a year ¼ just enough to keep us alive if we didn’t have anything else to eat. We wouldn’t get fat on it, but we would live; and if you think in terms of that kind of annual storage rather than a whole year’s supply of everything that you are accustomed to eat which, in most cases, is utterly impossible for the average family, I think we will come nearer to what President J. Reuben Clark, Jr., advised us way back in 1937.’” (In Welfare Conference, 1 October 1966.) (Witness from 3 prophets of the same counsel. In the mouths of two or more witnesses…)

(2)        In the same talk quoted above, Pres. Benson explained, “The Lord has warned us of famines, the righteous will have listened to prophets and stored at least a year’s supply of survival food….The revelation to store food may be as essential to our temporal salvation today, as boarding the ark was to the people in the days of Noah….Remember, Noah built his Ark before the flood came and he and his family survived, those who waited to act until after the flood began lost their lives.”

(3)        Thomas S. Monson said, “Important to remember is the solemn truth: Obedience to God’s law will bring liberty and eternal life, whereas disobedience will bring captivity and death.  It has been said by one, years ago, that history turns on small hinges, and so do people’s lives. Our lives will depend upon the decisions which we make—for decisions determine destiny.  Decisions have their eternal consequences; for example, the decision made by people at the time of the prophet Noah, when they laughed and they mocked and they jeered as this prophet of God erected a vessel called an ark. But they ceased from their laughing and their jeering when the rain began to come and when the rain failed to cease. They had made a decision contrary to the instructions of God’s prophet, and they paid for that decision with their very lives.” (Decisions Determine Destiny, WWW.LDS.ORG, New Era, Nov. 1979)

(4)        Pres. Ezra Taft Benson further commented, “Too often we bask in our comfortable complacency and assume the ravages of war, economic disaster, famine, and earthquake cannot happen here. Those who believe this are either not acquainted with the revelations of the Lord, or they do not believe them.  Those who smugly think these calamities will not happen, that they somehow will be set aside because of the righteousness of the Saints, are deceived and will rue the day they harbored such a delusion.” (Prepare For The Days of Tribulation, WWW.LDS.ORG, Ensign, Nov. 1980)

(5)        “Go to the ant, thou sluggard; consider her ways, and be wise: which having no guide, overseer, or ruler, provideth her meat in the summer and gathereth her food in the harvest.” Proverbs 6:6-8

(7)        Cash is not food, it is not clothing, it is not coal, it is not shelter; and we will get to the place where no matter how much cash we have, we cannot secure those things in the quantities which we may need ¼ All that you can be certain you will have is that which you produce. We must purge our hearts of the love of ease; we must put out from our lives the curse of idleness. God declared that mortal man should earn his bread by the sweat of his brow. That is the law of this world (Pres. J. Reuben Clark, Conference Report, Apr. 1937, p. 26, quoted by A. Theodore Tuttle, Ensign, May 1978)

The following amounts are figured per meal, with daily total calories, protein grams, and fat grams at the bottom. 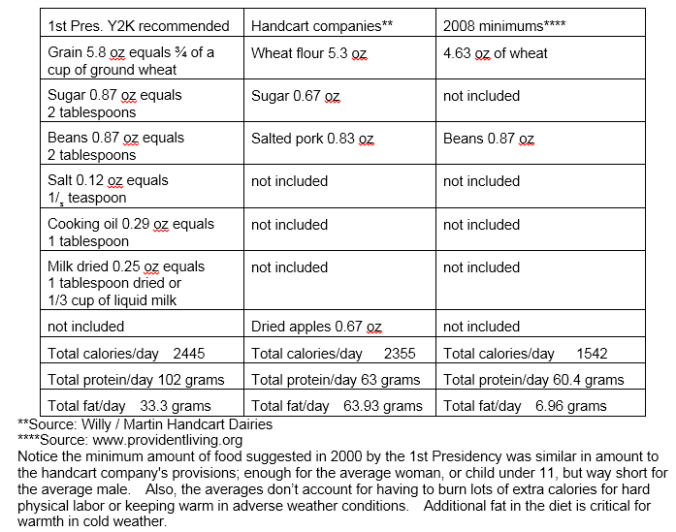 Can you see that the 1550 calories per day provided by the MINIMUM storage is not sufficient for any age group? Maybe you want your family to have a bit more, and have some to share with others?

This site uses Akismet to reduce spam. Learn how your comment data is processed.